I think it's time we talk about video games. I wouldn’t want you to believe that all I think about are tabletop RPGs, now would I? This week's topic forks off my article about turn-based RPGs and also the one about hitting a system lull for tabletop RPGs.

So you may wonder ... there's a common factor? GLAD YOU ASKED!

Take me as an example, turn-based RPGs and Pathfinder/3.5/D&D are things I know I will always eventually come back to. Why? I don’t know. I DON'T KNOW!

We all got a case of nostalgia!

I really want to get this out of the way as quick as possible.

A lot of people will chalk replaying games (or rereading books, or rewatching movies) SOLELY to nostalgia. Let’s assume, for the sake of the argument, that you don’t know what this means. Let’s ask the Merriam-Webster!

1: the state of being homesick : HOMESICKNESS
2: a wistful or excessively sentimental yearning for return to or of some past period or irrecoverable condition
also: something that evokes nostalgia

Ignoring that circular definition … it’s not entirely wrong. It’d be easy to scoff off homesickness with some “WELL! GAMES AREN’T A HOME!” but is that accurate?

Aren’t they though? How would one define what a home is? Someplace safe, comfortable? A shelter from the hectic outer world? A place where you belong?

There are games I spent so much time playing that they do feel like a “home away from home.” (Looking at you Dragon Age …)

It’s true that a lot of us have a rose-coloured-nostalgia-filtered when looking at games we played when we were young. I don’t know for you guys, but I’ve grown pretty old and I’ve now bills and housekeeping, and some even have *shudders* children. It’s not that surprising we replay some games to relive feelings for carefreeness and evasion. It's like returning home to a better time.

That’s a pretty appealing argument in favor of nostalgia as the main motivating factor of returning to game we’ve played a long time ago. But as I start a second Assassin’s Creed Odyssey or Fallout 4 playthrough less than six months after finishing my first, I can’t help but wonder … am I really nostalgic of my life less than a year ago? And, drum-roll please, the answer is a big …

It would be simplistic to say “I replay a video game because it brings back memories of how great and simple my life was before.”

I sure fucking hope I’m not the only one who sees other reason to replay a game! (Who am I kidding, if I were, no one would be evaluating the ‘replay value’ of most/all new games, amirite?)

Tune in to the (re)discovery channel!

In lore- or mechanic-heavy games are concerned, it feels like there’s always something new to discover.

Perhaps I had not noticed this one dialogue because it was between two important scenes and I was skimming at that point, or maybe I didn’t notice something in the background. I may have just stopped reading the damn in-game books after 20 or so of them because I wanted to kill Draugr (just an example off the top of my head). I could have decided to keep side content for another playthrough because I just wanted to get to the end of the game for now.

There are plenty of reason why we may miss, willingly or not, lore the first time. Finishing a game also gives us a new perspective on the content of the game itself. By knowing the end of a game, or the more subtle details of the universe, you can try to figure out how the protagonists may have known, or not, what they could have done different, etc. Knowing more about a game, its lore, and its ending, may give a whole other interpretation to a host of dialogues throughout the game, even in the first scenes.

Knowledge of the game, however, is not the only factor influencing how you perceive a game and its content, mechanics or otherwise.

For one, you may have grown older and smarter, learnt to enjoy other aspects of a game. Where you are in your life and the challenges surpassed as individuals or as a society also shape your perception of a game, its story, its character, its mechanics, its values …

When I played FFVII the first time, I was kind of young, it was kind of one of my first RPGs, English was kind of not my first language (still isn’t I guess -- but I wasn’t very good), I also didn’t have a great grasp on politics and environment and general human cruelty … I was a kid for fuck’s sake! I just didn’t have those concerns! What I cared about was "Did I forget to put my bike inside?" 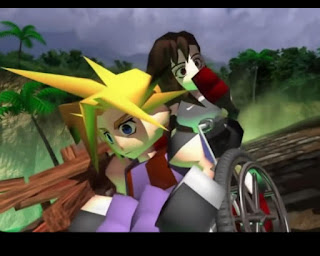 When I played it again, a few years later, some lights flickered in my brain and I was like “Ooooooh… so I’ve totally missed the whole eco-terrorist thing…”

Down the mechs abyss

I’m not saying ALL GAMES have super complex mechanics, but usually games will have lore or mechanics aplenty. Ok, some types of games are more focused on challenges (like Tetris has virtually no lore, pretty simple mechanics, yet … super replayable) but that's not what I'm talking about here.

There are games that I replay not for the depth of the lore (although that’s a nice plus) but because of the mechanics.

My favourite Final Fantasy is FFXII (you can throw tomatoes, I don’t care). The first time I played it (when I was … geez I dunno, I’m afraid to look … barely an adult, I guess?), I glossed over the gambit tutorial. And by “gloss over,” I really mean “didn’t fucking read it.”

I completed the game by controlling my three characters manually AT ALL TIMES! And only started having a really hard time when I was trying to defeat Cúchulainn and could not physically heal my party fast enough. It was just not possible. 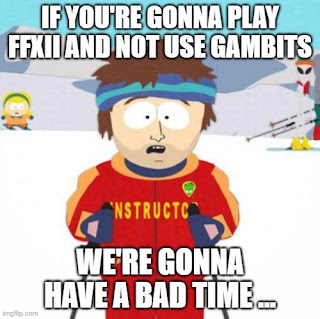 I was over a hundred hours in this game and had not actually utilized the mechs the way they were intended to. I finished the playthrough with wonky gambits but figured once I played over, I’d make sure to use these the best I can.

That’s just ONE example of ONE mechs learnt too late within a game. And while it's true that you refine your understanding of a single game's mechs when replaying, you can also sometimes transfer knowledge from one game to another.

For example, having played Digital Devil Saga made Persona 3 a lot more bearable the first time because I knew how to exploit weaknesses and the importance of buffs/debuffs. But guess what!

You can even transpose from one unrelated game to another unrelated game! SURE! I COULD have learnt to use cover in Fallout 4, but it wasn’t REALLY necessary, it just helped. Guess who taught me that? Commander. Fucking. Shepard. Who’s got NOTHING to do with Fallout.

All this to say, your knowledge of games, their mechanics, and what makes them work, formalized or not, can make you pick up a game you think you know well and discover and appreciate all sorts of small (or not-so-small), cool things you may have missed the first time around.

Rising to the challenge

Another reason to replay a game, regardless of type, is to challenge yourself. Just because you finished a game, doesn’t mean you finished a game. Sure, in some cases, most notably sandboxes, the game just keep on going and giving.

But for any and all game types, there can be self-imposed challenges: beat it faster, have a higher score, lose less lives, don’t grind to finish the last boss, up the difficulty level, do all the secret bosses, play with different people, try a different character class or game style … JUST TO NAME A FEW!

Again, just because you’ve finished a game, doesn’t mean you’ve tackled all that it has to give you. And for some players, revisiting those games they love and try to do better is just one more incentive.

Familiarity and control
There’s no denying that life is fucking crazy. I mean, everyone has their own challenges. In my case, between four furbabies, work, housekeeping, tabletop planning and running, writing, and existential crises, I often feel like I’m just … along for the ride?

I know I have a certain amount of control over my life but … let’s be honest, when the shitstorms hit and I start panicking, that modicum of control like it’s way too little feels very little and I’m like just on the backseat of my own existence.

Aight, enough wallowing. I swear I was going somewhere non-depressing with this! 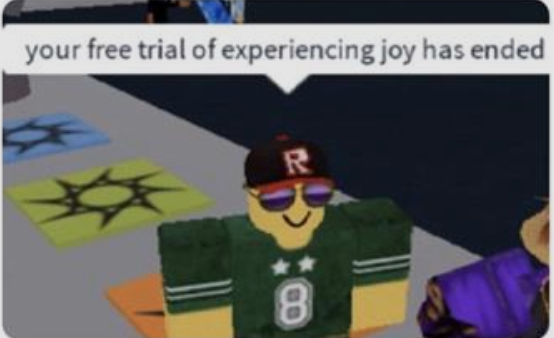 When returning to a game you know well and know you love, or just a game you have played before and just want to enjoy the ride again: you have control over your gaming experience. You’re thrown in a world where the surprise will be limited (unless you haven’t played the game in like 15 years but even then it’d be more like a mild rediscovery).

You find yourself in control of your environment, able to set the pace and do what you want knowing, more or less, what the end result may be. I mean, I love being surprised and challenged by games, but sometimes, it’s not what I’m looking for …

Sometime, amidst the chaos of my life, I’m seeking the comforting experience of knowing what to expect.

To an extent, all gamers have control of their gaming experience: on most games you can just pause or quit whenever you want (ok, it might piss off team members, but … eh, you can’t exactly quit your life and come back an hour later). But there’s something super comforting in coming back to a place you know and love, too. OH WAIT! ARE WE TYING THIS BACK TO NOSTALGIA?

Some people, even gamers, won’t understand why you have spent hours upon hours on a game, maybe because said game doesn’t resonate with them, maybe because they seek a different experience. Shit, they may not get why you’re playing Spyro the Dragon AGAIN! Or why you’re so giddy that Persona 5 Royal game was released two weeks ago (didn’t you already like … just finish that game?)

But the truth is ... it doesn't matter! It's your time. Just ignore the naysayers: you’re hurting no one by playing Devil May Cry for the 7th time. Video games are there for enjoyment so … you know, just enjoy them?
Labels: Video Games