Because I don’t know how to express this … I’ll use a food analogy (I love food -- sue me).

For the past nine-ish years, I’ve been eating spaghetti. I mean, sure sometimes I have macaroni or ravioli instead, but there’s not much variety. Back when I was younger, I’d have sushi or shish taouk from time to time, but lately … nada. Not that, y’know, I have anything against spaghetti! I LOVE IT! It’s safe, I know how to make it great, my friends enjoy it too.

But … I wouldn’t mind going for something else from time to time.

Still with me? Ok, so obviously this is NOT about pasta. I fucking love pasta and if it would not make me weight like 400 pounds, I’d probably eat it every day! It’s about Pathfinder. Well, Dungeons & Dragons, Pathfinder, Starfinder … not that anything’s wrong with these games but, y’know, maybe some change would be good, too?

The fall of the Iron Gods

We started the Iron Gods Pathfinder campaign three years ago. After trudging through the first book and a part of the second, we took a break for a few months. Half the team had already changed due to fallouts and scheduling issues. Still, we managed to make it through the second book although it took a year or so.

Book 3, 2020 rolls in and does not pull its punches: already,we’re looking at an average of one game every six weeks. EVERY SIX WEEKS!

The initial expected pace was one game every two weeks. We were just a teensy tiny bit off. Anyways, now that everyone’s holed up and we can’t see one another, I was faced with a tough choice:
I decided to rip off the band-aid. The Iron Gods are dead. Some of my players were not really interested tabletop anymore, and we were just mechanically going through the campaign: no one was feeling very involved.

Saddest part? They’re never gonna see the Black Sovereign. I was really looking forward to that!

Back to this spaghetti thing.

Of all the players from my group, I kept two. Two that are always available, always hyped, always there. I was like “Ok let’s see what we could play …”

I went through the different tabletop games I owned, or that I was willing to purchase, and decided on four suggestions:
Maybe it IS my fault for including Pathfinder in the choices. I didn’t think my players would be ALL OVER THAT! At least not that much! I mean, I’ve been super curious of 2E and even if I’m kicking off an Eberron campaign, I’m #TeamPaizo so … y’know, I thought why not!

What really got me thinking is when I understood that, given the choice, they’d have stuck to 1E. There’s nothing wrong with Pathfinder 1E. Hell, if there was, I wouldn’t have spent that kind of money on it! 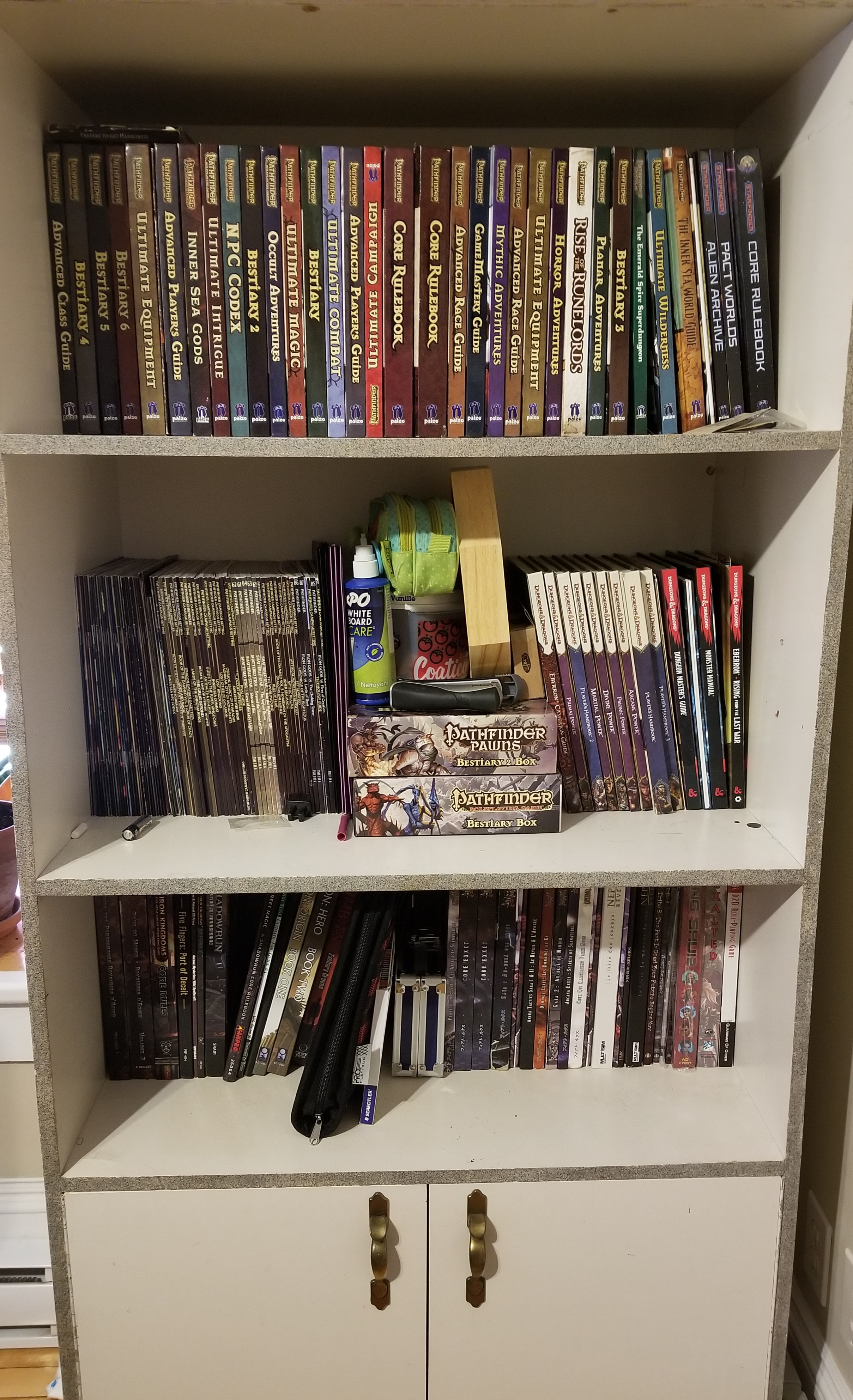 But, as a group, I kinda feel like we reached a state of inertia. Are we just assuming that we “know what we like,” but in truth, we’re kind of afraid of having to learn new things?

I get it, diving into an unknown system CAN be daunting. If you have no one at the table who knows it, then, who will adjudicate properly? But if you have ONE person who knows the system, who’s to say they won’t abuse this to ruin it for everyone (willingly or not)?

It’s a dilemma: eating food we’re not familiar with and risking not liking it, or worse, feeling sick afterwards, or eating more spaghetti because … well, we know what to expect.

I don’t know if it’s age, having busy adult lives, or just perhaps less passion in the hobby as a mental challenge than we once had, but that’s our situation.

What could I have done better?

I’m not gonna bitch or moan too much, because reading The Impossible Lands setting and working on this campaign, I’m seeing that there’s a ton of stuff in Golarion and in the system that still sparks interest. So perhaps “better” is not the best term. Let’s go with “differently!”

What could I have done differently?

I’m not so much about forcing stuff on my players, mostly with 2 left. But, looking back on … last week, here are a few suggestion for my past self:

1. Ask players what kind of game they would enjoy

I’m not talking mechanically speaking because that leads us right back to the funk we’re in. No … I’m talking themes, power level, setting type, pacing, … General stuff like “What movie would you see yourself playing in?” or “What’s a video game that struck your imagination in the last 2 years?”

It’s easy for me, as the GM, to say “Here are the ideas I already have, what would interest you the most?” But it’s much more interesting for everyone involved to say “So these are the ideas you guys provided and here are my game suggestions.”

2. Prepare a longer brief for each suggestion

Beyond having general ideas of what I was interested in running (which is not inherently wrong), I presented my players a one-liner about the campaign with very little information. Bumping this to let’s say half a page description (or talking point) would have helped them envision themselves better in the campaign and see what might spark their interest.

Not possible at the moment because reasons, I normally start any campaign with a Session 0, which is where we create characters and discuss the expectations and such. I feel like here, we would have benefited from what I’d call a “Session -1” … honestly, I don’t fucking know what to call it, but basically just a forum where we could discuss the different systems and settings, where players could ask questions and feel involved in the campaign creation process.

Got any other tip to break the spaghetti habit? Do share them with me! In the meantime, I’ll enjoy this plate of lasagna I’ve just made for myself! 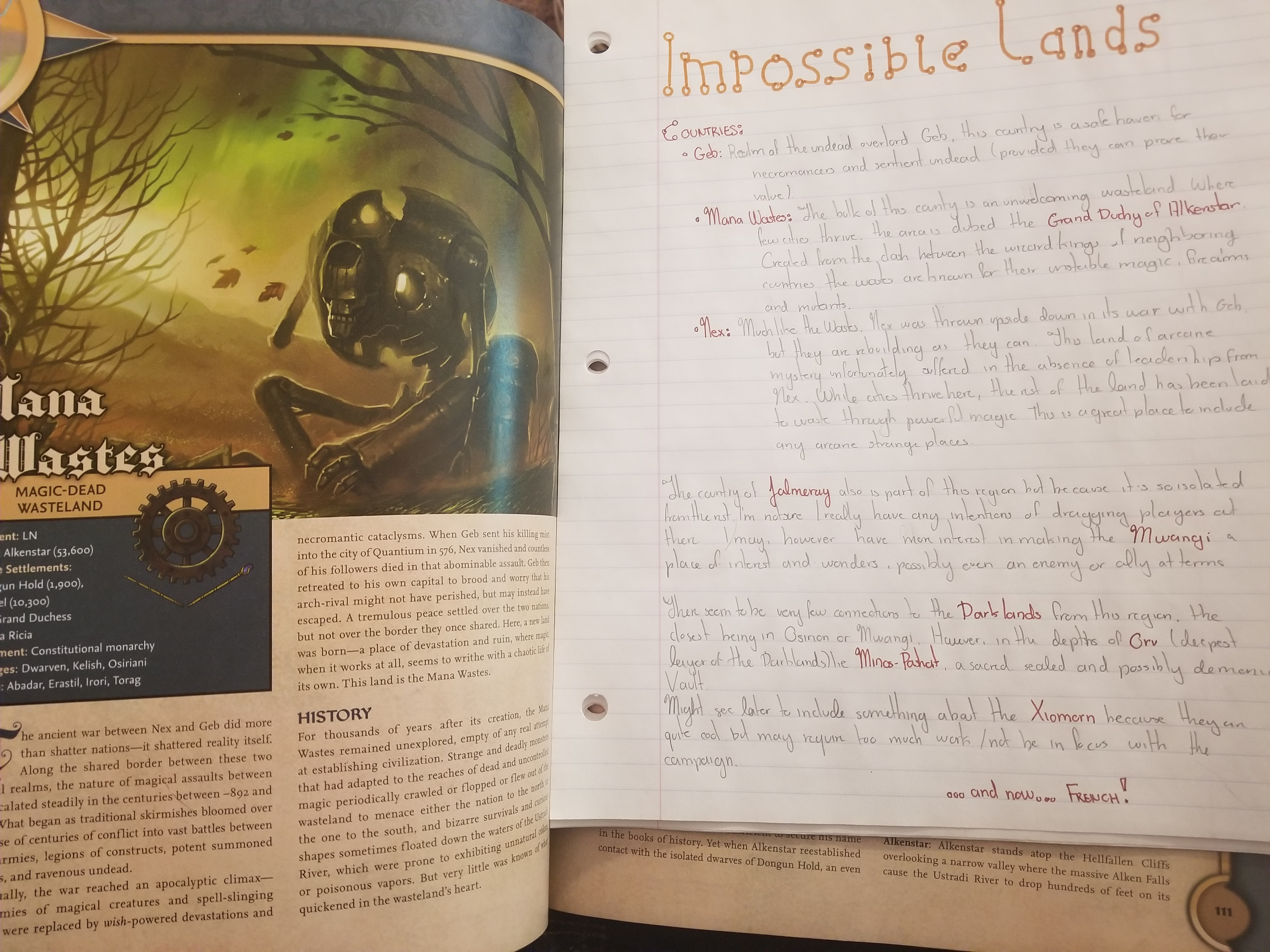