My girlfriend was talking to a (MUCH YOUNGER) coworker the other day about games and stuff. He was asking her for some suggestions. She went right for the throat and suggested a game she really enjoyed but that is still current: Persona 5. Dude just shakes his head and goes: “Nuh uh, turn-based RPGs are a thing of the past.”

She was shocked. Shocked? Nay, she was APPALLED!

When she told me about it, she just could not believe it. Like, “when did we become so old?” I assured her that we’d been old for some time, and began pondering.

Long before my girlfriend had this conversation, I had scoured the internet in search of an answer to my cravings. I’ve seen the very same argument spun in more than one way. Every time I crave a good old turn-based RPGs, it seems that I find myself defaulting the the ones I already own for my ventures into the stores (be that digital or otherwise) are often unsuccessful. So let’s bite into this topic, shall we? What’s with the lack of high-quality, polished turn-based RPGs?

DISCLAIMER: While I wish I could base my thoughts on cold, hard facts, when it comes to sales figures, budgets, growth, etc. information is unfortunately pretty scarce. Anyways, don’t wanna bore you guys with numbers!

«Turn-based RPGs were always a byproduct of hardware limitations.» 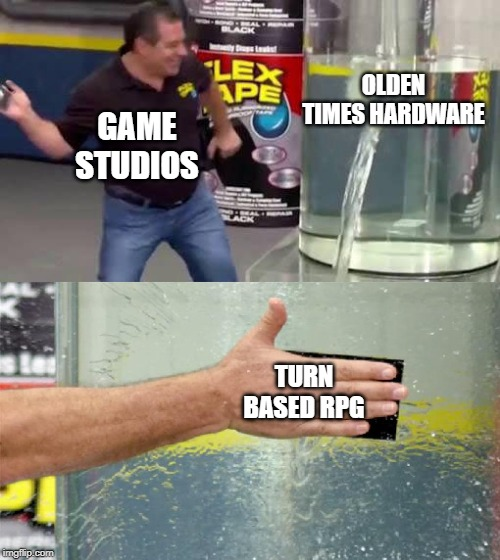 This is often the first argument I hear: They did turn-based RPGs because they couldn’t do any better. RPGs were not realistic because doing anything more realistic or immersive was not possible with the limitations of the time. Ok? So let’s talk “Action RPG”?

It’s true that, at a certain time (read: during the disgraceful era of early 3D), not many Action RPGs were fluid and/or realistic. Even in reputable action games, the controls were often clunky and when returning to them, you seriously need that little nostalgic boost to say “That’s a really good game!”

And those action games? They were pretty short. Like way too short to withstand oftentimes overly complex RPG stories. In essence, this point can make sense: if you were gonna tell a longass story with 20 characters, making your RPG on the actiony would make no sense because it would be too much information for the poor CDs, cartridges, consoles, whatever.

While the logic is sound as to why turn-based was favored for certain games, it sort of implies that no one really wanted to play or develop turn-based games. It was simply caused by technical difficulties.

Does everyone really dream of fully immersive action game? I don’t think so. Otherwise old Final Fantasy wouldn’t be getting remade/re-released every few years. Or at least they wouldn’t sell.

So ... the new console generations, and our amazeballs PCs, there’s no limitations anymore! So we don’t need turn-based games!?

«No one wants to spend millions on something that won’t sell!»

Or how turn-based RPGs are a niche market … just a bigass niche.

They may not be the most popular type of game, but there sure is a market for them! Getting sales number is a little tricky, but while looking, I found some interesting stats:
Sure, there’s a gap, but it’s not THAT big. Pretty sure the budget is also ways away. I couldn’t find the budget for DQXI but Far Cry’s was apparently 80 to 130 millions. And that’s one hell of a budget.

We still sometimes see big studios popping out a new turn-based RPG now and again (after all, in the last few years, we got World of Final Fantasy, Persona 5, Bravely Default/Second, Ni no Kuni II, Persona 5, Pokemon Sword & Shield, Trails of Cold Steel III). Most of these big titles actually do sell reasonably well, actually. Just, maybe not as much as a HUUUUGE studio like SEnix may hope. But those are a droplet in a sea of other types of games. 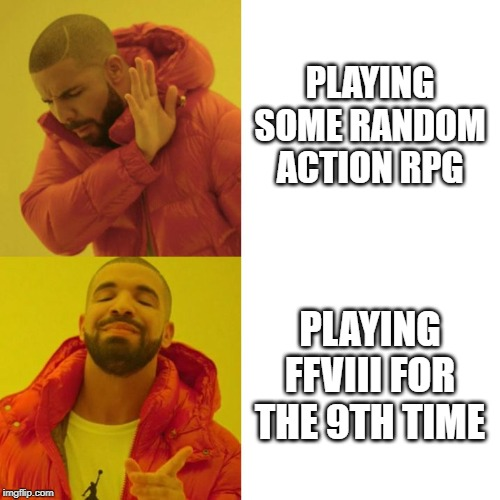 Strangely enough, games will purchase again and again ports and remasters of games that were released on other systems or a long time ago. I guess porting a game is a whole lot easier than making a new one. Why not go for the easy buck?

Well, eventually, the pool of games to port will be stretched too thin. Companies that made games 20 years ago may have gone under, or been purchased, or disbanded and the rights were lost along the way. The unfortunate focus on remaster gives the impression that the turn-based crowd is just a bunch of nostalgic fools. WE JUST WANT GAMES THAT ARE GOOD!

Perhaps it’s a smaller market, but it’s a market that just as willing to spend money. We’re like the unloved kids who just want their parents’ attention. I swear, we’ll go to great lengths for a semi-decent title!

«Ok, but you know mechs can be outdated too?»

Games now save automatically at certain points, consoles are powerful enough to handle many more elements at the same time, there’s generally more memory available, there are more available buttons and combinations on a PS4 remote than on a NES and SNES remotes combined … so yes, some aspects of old games outdated.

For everything you gain in a video game, you lose something. Sometimes good, sometimes bad.

I think for newcomers or outsiders, a problem lies with the replication of outdated mechanics, just because they worked in old games that were awfully popular. However, turn-based RPGs ARE NOT those few mechanics. Even the Final Fantasy remasters have some changes to them so they appeal more to a wider range of gamers:

The core of any game is not the annoying mechanics, but sometimes, they’re part of it.It’s all about figuring out why old games were amazing and why they struck a chord, figure their essence, and building upon it.

I’m pretty damn sure that those who just LOOOOOOOVE turn-based RPGs don’t LOOOOOOOVE them because of random encounters and ridiculously long final boss attack (Yes, I’m looking at you Sephiroth!)

There’s got to be something deeper, and ways to adapt these mechanics that have … aged, to make them more elegant and appealing. Gamers are no longer the stereotypical teenager with a lot of free time. Most gamers are adults with day jobs and families, so maybe they don’t feel like grinding the fuck out of a game for 20 hours before getting to beat the last boss.

I mean, that’s where I’m at in Trails of Cold Steel and lo and behold, I’m not playing anymore!

«There are other types of game who drive a better narrative.»

For a while, if you wanted to play a game where there was an intricate story with a host of characters, your goto ye olde RPG. Or books. Books are cool too.

Your video game options really were limited: shooters, action games, platformers, ect. really had minimal to no story. Like, a few screens to give you a sense of what you’re doing aaaaaaaaand you were on your way! If you were lucky, you had a few pages in the booklet (they were a thing then) to explain the setting and story. If you were lucky.

As gamers, we’ve come to expect more from games: including story elements in games that  were not traditionally story-driven. Gaming is also about having a sense of purpose and accomplishment.

I think that’s great! I love a good story-driven, character-focused, coherently set story as much (probably more) than the next gal. Narrative in games got me playing shooters like Borderlands or Destiny, and enjoying action games all the more, giving me reasons to persevere where I may have before just have gone “Meh, fuck this.” I mean, I so that for a few games. Looking at you, Bloodborne.

This argument comes at the cost of saying that turn-based RPGs are not a genre (or subgenre) of their own: they were just a media of their time to drive a story.

Before you say anything, I know that small studios and indie turn-based RPGs are a dime a dozen these days. And I’ve nothing against those, per se. I may play and enjoy some of them, but these games often lack polish. I’m not saying there’s anything inherently wrong with pushing out games that look like they’ve been made in RPG Maker in 2020, but that’s just not what I want to play.

Because RPGs demand such a time investment, I’d like a bit of polish and production value at least SOME aspects whether it be script, translation, images, graphics, … anything really?

Like, I picked Azure Saga Pathfinder, game showed promise if I chose to look past the text, which I did for a while, but 10 hours in, I just couldn’t do it anymore. QA is often glossed over: games can be easily broken, text or script can be tedious …

Another trendy thing that, in my mind, makes a game look less polished is replacing tradition cutscenes with static background images and a few character pictures. Costs less but also kind of breaks immersion. Fairy Fencer F is a good example of this:

And I’m not saying that I won’t play ANY of these games. (I almost finished Fairy Fencer before losing my save.) I’m just saying that I’d like more, high end, AAAish games in that genre. Similarly, I’m not saying there aren’t any, several were released over the last years, but they were few and scattered across systems.

And maybe you disagree, and maybe you don’t. But if there are more turn-based RPGs, it doesn’t mean that there will ever be less of whatever type of game you prefer. Pie for everyone would be a damn good thing :)