The Veteran Series: As a matter of stats 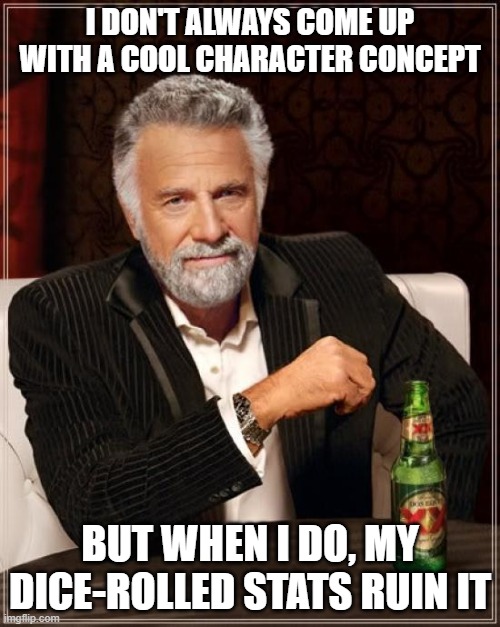 Sometimes during Fall ‘98
Dear diary,
So. I think I got the basic idea down. We’ve been talking about this for months! MONTHS! Been looking for players among my … I dunno, I won’t say “friends” but … people I go to school with? We gathered a small crew of random people with nothing in common except wanting to try out D&D.

Now that we’re all here, it’s time to start rolling! Starting by … stats. I don’t know it yet, but these will be the bane of my existence for the next … monthsyearsdecades.

The first Dungeons & Dragons edition I played was AD&D 2E. During the summer 1998, my brother bought or otherwise got the three core rule books. In French. Those who know me also know that I don’t speak too kindly of this edition. Not because of the edition itself ... it’s more a combination of things that make me never wanna return. Like. Ever. Starting where it all beings: Stats.

I was young, I didn’t bother reading the book cover to cover, and honestly, the GM kind of had the final word on this. Trust me, I wasn't EVEN aware until pretty recently that there was more than one stat generation methods 2E. Every single time we went with the first method. The hardcore method. The method I’d never want to use again:

3d6, six times, in order. No reroll. No forgiveness. 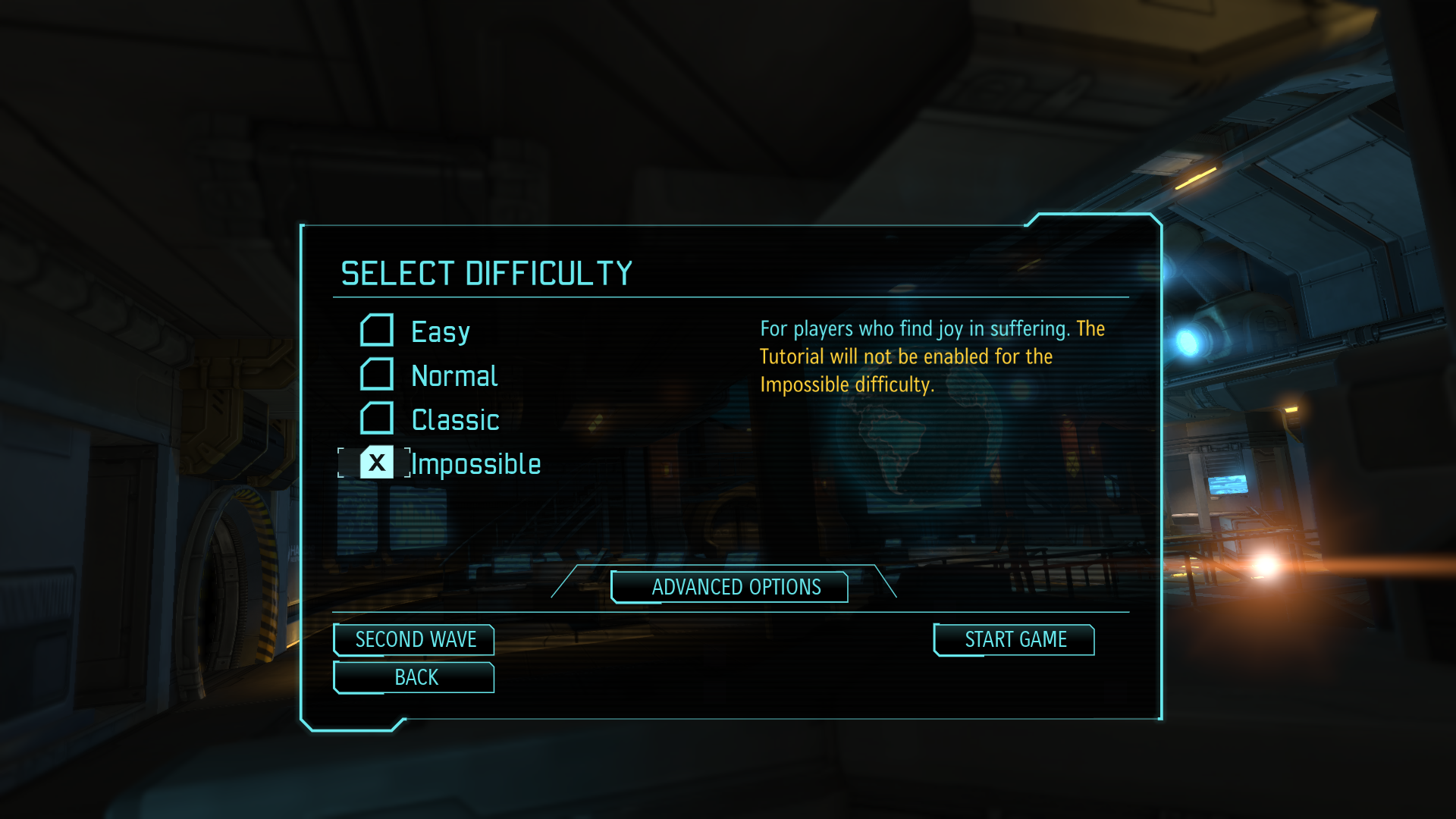 That’s why I said it was the start: there really was no point in having a concept when your stats would instantly screw you. I didn’t play clerics because I wanted to play clerics. I played clerics because that’s what my stats allowed. Think about it! You just read this amazing book filled with promises of sword fights, adventures, dragons, and magic! And you roll your stats … 8, 10, 11, 7, 13, 10. Does it matter what you want? You’re gonna suck anyways.

We played like that for years! For YEARS I wanted to play a ranger and my stats didn’t let me! Because you needed to meet minimum stats, too! Impossible mode, I swear.

Sometimes in 2001
Dear diary,
FINALLY! I can play … anything! Stats requirements begone! New DM, new rules! I got nothing against our previous DM, he made some really cool campaigns, but I can’t complain that we’re going in another direction. It felt like such a drag at times, like we were playing the hardest difficulty setting of the hardest game … I can accept a challenge, but let’s be honest, it’s not super satisfying.

Those new books are so pretty though, can’t wait to tackle this new challenge!

Rolled around the 3rd edition, then 3.5 a few years later. This was an interesting era. As far as stats are concerned (this is the topic, innit?) we did a lot of exploration during this time. Maybe because most characters felt “not as strong” as in the previous edition (for things unrelated to stats, like *coughcough* balance), we tried to compensate with higher stats.

At least, that’s how I see it with perspective.

Stuff we tried: 3d6 not in any order, 3d6 rerolling 1s, 4d6 dropping the lowest score, point-buy, 6 plus 2d6, … I’m probably forgetting some. At the time, we weren’t too keen on point-buy: we just LOOOOVED rolling dice!

With higher stats, less restrictions, and more classes, this was an era of discovery where I could freely try a whole lot of different character concepts: from basic to super-what-the-fuck. While when we were playing the second edition we got some 18s every now and again, with these methods we could sometimes get several 15s or, *gasp* character with no dump stat.

Still, the fact that we relied so heavily on a random factor tells me we had ways and ways to go.

Summer 2008
Dear diary,
WOW! Already 10 years of Dungeons & Dragons! One may think I'd be bored by now, but nope .. We just ran play test for the 4th edition, and I'm fucking stoked! My friends are ... less so. I see a ton of potential there. Maybe they don’t give a fuck because they haven’t played a 3.5 cleric where you basically feel like a healbot: all your spell slot spent on heals because your party just can’t be fucking careful.

Enough about that. It’s been a great year too, between a new edition, discovering a whole new system with a whole different DM… I’m optimistic!

For whatever reason, we got back together with my highschool group to play a 4E A Song of Ice and Fire campaign (strange mix, I know!) with our DM from the second edition. It was like … flashback upon flashback. I may have been a little worried. I mean … 2E had been a rollercoaster. But new edition, new rules held: we instead use what is probably my favourite method for generating stats: the standard arrays. 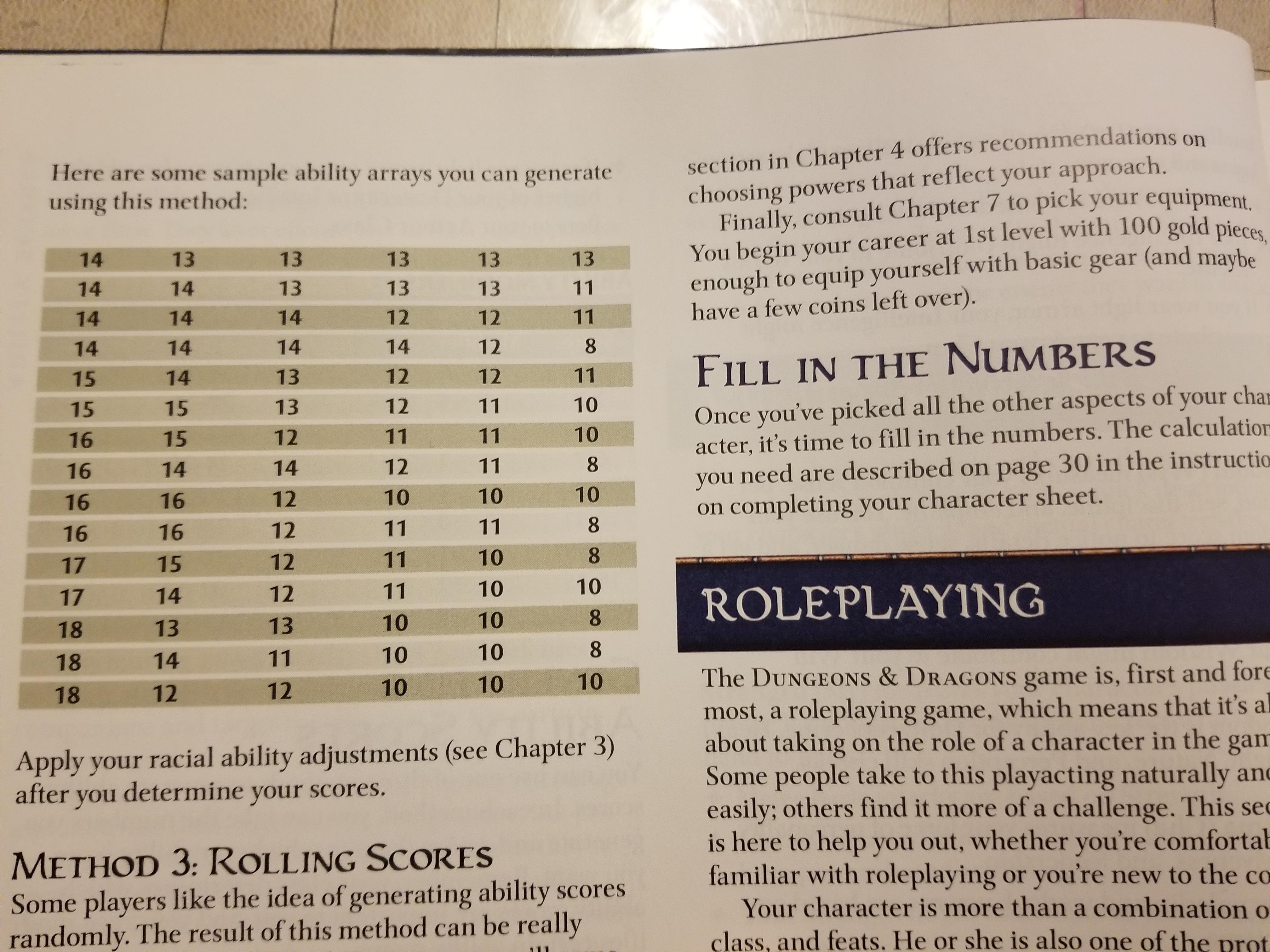 Basically the DM picked 5-6 arrays from the book and told us “Pick whichever fits the character you want to do.” It was simple and effective, gave us the impression that we had some power over our stats without creating monsters. Some classes required a single attribute, while others needed several, so it was perfect for finding what we felt was best.

Because they had simplified the point-buy system with this edition, we also worked with that from time to time, but it was not the preferred method, still, it was paving the way for where we’re at now.

Fall 201something
Dear diary,
I’m not sure how it happened or how I agreed to this, but I guess I’m starting to DM Pathfinder soon. I have a pretty strong foundation with 3rd and 3.5 so I won’t be lost but … erh … Anyways, we’re starting from scratch, in a world I created so it should be okay.

I’ve only ever GMed systems my players knew less than me, so this’ll be … interesting. I decided I don’t want a crazy ass power level so I’m just gonna go with point buying. They can suck it up. There are software and websites to help smooth out the process and my players aren’t dumb, they’ll figure it out!

Younger, we got a kick out of rolling stats: the numbers were sometimes ludicrous, but whether we acknowledged it or not, it created serious gaps in the character powers.

These gaps could sometimes be compensated with understanding DMs, a great RP experience, or the capacity to make the most out of what you had, but it really irked me. It’s not about wanting everyone to suck equally … I’ve always been pretty generous with the number of points to buy stats with. No, it’s about everyone having a fair chance at building a character with the same foundations.

For the past few years, we’ve been doing point-buy for campaigns and, sometimes, for one-shots we go above and beyond to generate crazy stats.

As my Pathfinder 1E days are winding down, I wonder what the future will bring. Seems unlikely I’ll ever go back to the very randomized methods that penalize the less lucky of us. I don’t know what made us, as a whole, move toward a more balanced method. Could be maturity, trying other systems that work differently, or experiences that did not turn at our advantage.

But what I know for sure is that I’m not crazy, not totally crazy, for liking the way we generated stats back when we started: it WAS crazy, and I would NEVER do that again. Ever.