The Veteran Series: Time to hit the snack

Alright we’re back! And this veteran ain’t getting any younger!


Sometimes in 1999
Dear diary,
I’m so STUFFED! Mom made spaghetti for our D&D group. She doesn’t do it every week, but when she does it’s just so good! I mean, feeding a bunch of nerds’s gotta be expensive, though … but I sure am glad when my mom or Jici’s make that extra effort.

Yes, that’s right! Today we’re talking about food! Not only do I LOOOOOOVE TTRPG, I also LOOOOOOVE food (I know that’s surprising …)

For a large portion of my gamer life, we’ve ordered pizza for dinner, which I'll get to later. Let’s first talk about homemade food, not made by the players, but by our parents. Because, seriously, our parents rocked (sometimes)! Pretty sure we didn’t tell them enough, but that’s a debate for another day.

I can recall a few times that we were playing either at my place or at my friend’s place and our mom would just make something for the whole group: could be deserts, dinner, snacks, it doesn’t matter. To me, there was always something pretty wholesome about this, maybe because D&D had such a bad rap with people “of a certain age.” I’m glad my mom wasn’t like that, and not only let us bring a bunch of geeks in the house, but also learnt to appreciate our friends, joked around, and sometimes, even cooked for us.

Of course, that’s not a tradition that can live on forever, but it’s one that was strongly appreciated.

March 2001
Dear diary,
Pizza, again. I’ve got nothing against the stuff by why is it so uneven? 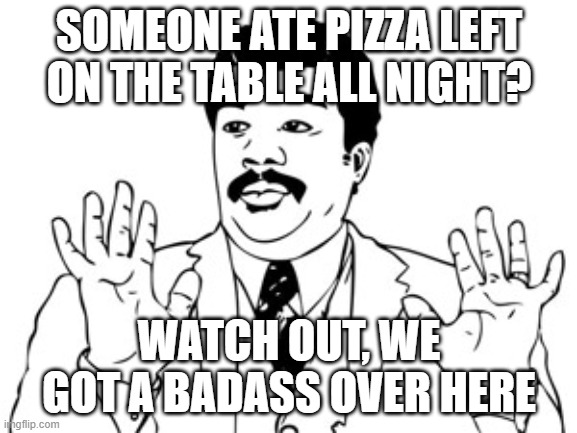 A tradition still alive many a years later is the ever-classic “food order.” We’ve all done it. Because it was so fucking cheap, of course we would order pizzas. I was playing D&D with five guys for many, many years. FIVE. And boy, boy, boy did they eat. It was … almost stomach-turning at times.

We often ordered pizza for a cost of about 5$. I mean, realistically I more ate for like … 2.50$ worth of pizza but let’s just leave it at that. I’m pretty sure it’s a staple at many tables. Pizza is pretty simple and a crowd-pleaser. Plus, when you know what everyone likes, it doesn’t take an hour to come up with an order. But of course, it gets old. Real old. Real fast.

As years passed, though, maybe our taste buds started craving different stuff? We’d still make big orders just at one place, but we’d vary at least the taste: pizza, shish taouk, pasta, Chinese. Never … you know … fancy stuff. But practical, cheap food that we could get delivered to get as much game time as possible.

But see, that’s interesting: Getting the most out of our game time. When we could play every two weeks.

August 2009
Dear diary,
OH MY GOD! I’ve seriously never seen a bag of chips disappear so fast. It was emptied in a bowl, on the table, like … to share. Blinked. Gone. GONE! I swear, this guy sometimes … He’s not like … being mean or anything, he just can’t resist a good snack I guess. Welp, at least he brings some too, so it’s not all bad … Next time, I’m not taking my eyes off that bowl.

SNACKS! Beyond, y’know, actual meal time, there’s a world of snacks. When we were younger, we didn’t really do snacks. I don’t know if it’s because we saw the books as more important than they were, or because the budget was just tighter or … because we didn’t want to be distracted while playing? I don’t know. I have NO idea.

Then we started bringing our own snacks, that we watched over like gargoyles. Seriously, I wouldn’t trust any of them guys with a bag of chips or a chocolate bar. But as years passed and groups changed, we’ve come to an unspoken agreement about snacks: everyone brings snacks, everyone shares snacks. Forgot your snacks? You can bring some next time.

Sure, bribing the GM with food may work, but when you all participate in collective bribery of all players, it’s like everything becomes fair again.

Sharing food’s just good for the soul, you know … speaking of!

February 2018
Dear diary,
Just got back from the grocery store. We got all we need for some kick ass fajitas. We’d been debating all week: delicious chicken, fajitas, beef bourguignon… Went with whatever felt right at the moment. Dem fajitas gonna be good in mah belly! Even if it means sacrificing 45 minutes of oh-so-fucking precious game time for cooking!

Pathfinder … Fajitas … Pathitas. Must be heaven. 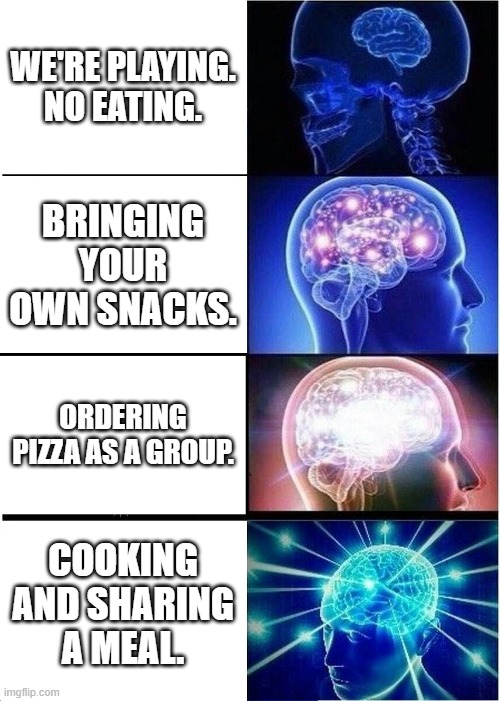 I'm not saying we don’t order food anymore, because we do, from time to time. But we’ve gone from doing batch orders to very specific, everyone gets what they want OR we try a new place.

It’s not rare for us to just make a meal together, splitting the cost. It’s about as expensive as buying pizza, but tastes so much better. SO MUCH.

Even if we played every two weeks, I think I’d still do that: In the summer we BBQ, in the winter we do stuff in the slow cooker, and in-betweens, we just cook something we all agreed on. It feels so much more mature than ordering 2 large pizzas did. Maybe it is. Or maybe I’m just telling myself that.

September 2019
Dear diary,
Today, I’ve had “goutte à papi” whatever the hell that is, can’t recall the actual name, but it tasted pretty good. I’m feeling pretty plastered though.

Thank heavens the game’s over. Time for some ZzzzZZZzzzZZ …

Truth time. I didn’t really drink before I was 21. I’m Canadian, so that’s a little weird. I can’t even recall if my friends by my early college years were actually drinking when playing. I think they may have been? Beer’s never been my thing. I just don’t like the taste of it.

Still, I recall that when we were playing during the week, the boys would share a few beer or maybe one or two shots of alcohol, and that was fine. I wasn’t the GM, it wasn’t my problem. But I was fucking uptight at the time.

When I started actively DMing, I wouldn’t drink, or would do so in serious moderation so that my ability to make decisions, deliver the game, and … you know, DM, wouldn’t be hindered.

Well, this time is NO MORE!

I’m not like a drunkard or anything, but as my name may imply, I do get tipsy when DMing. I can keep track of the game, but I become a little louder, and a little more excessive, which, in the case of someone so reserved is actually not a bad thing?

One of my players brings us mystery alcohol every game, and we share a shooter. I have bottles of Disaronno and Sortilège and share that with my friends. One guy goes straight to the gin and lemonade, another brings fancy beer. Sometimes we have wine, sometimes we have cider.

The trick to drinking and gaming is knowing your limits, and having really fucking long games (6 to 10 hours in our case) so that you don’t overdrink!

Alright that’s all I’ve got about food for now! *pours drink* Laters!