It won’t come as a surprise to anyone if I say that I was always much of a geek. Not just me, even: My dad is an unashamed trekkie, we’ve had a NES in our basement as far as I can remember, some of my fondest memories is going through endless rows of books with my mom at the local library. Those things were, you know? normal. For me.

Of makings friends that are more than convenient

Because that was just my life, I didn’t immediately realize that it wasn’t everyone else’s (ah, the innocence of youth!) In primary school, much like in my older days, I was terrible at making friends. I mostly made friends from circumstances: “Oh! We’re sitting next to each other, let’s be friends!” I mean, that’s how I figure it happened. In truth, I don’t remember! I somewhat remember my friends’ names, but not necessarily how we became friends.

‘Twas around 5th grade that I was introduced to the wonderful world of Magic: The Gathering, then in the summer of between primary and high school (somewhere in middle school, basically for you people in the US). By the time I started going to a new school, I was more aware of what I liked: drawing, reading, karate, video games, Magic: The Gathering, and tabletop RPG. Soon would be added to the list “writing” and “anime.”

I won’t go over how high school went for me here (that may be a tale another day), but let’s just say that within a year I had grouped with various people, some of whom shared my interests, some who didn’t. And we could get the proverbial ball rolling and set up a Dungeons & Dragons table with friends. I say “we” because, actually, my brother was the game master at the time (and I could talk for a long time about our experiences, but I’ll need more mead for that, and now’s not really the time!)

Alright, the scene is now set: after many years of not knowing I was a geek, I now was hanging out with other geeks.

When you meet people who share your interests (or at least your place in the high school food chain), it’s normal to want to exchange about your likes, dislikes, recent discoveries, etc. But imagine this situation:

Friend: “So last night we were rewatching Episode IV, you remember that time that …”
Me: “I actually don’t care for Star Wars.”
F: “WHAT? You’re a Trekkie then?”
M: “No, I don’t like that either …”
F: “Oh, we probably should take your geek card away, then.”


It may seem like a trivial thing to say. But is it really? It got me thinking a lot. See, this is pretty much how I pictured my geekdom, back then: 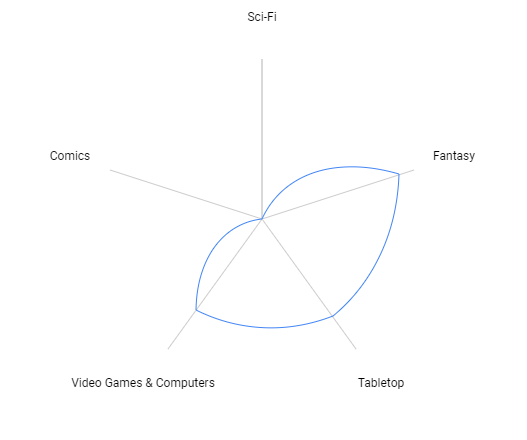 And this is pretty much how I pictured most of my friends’: 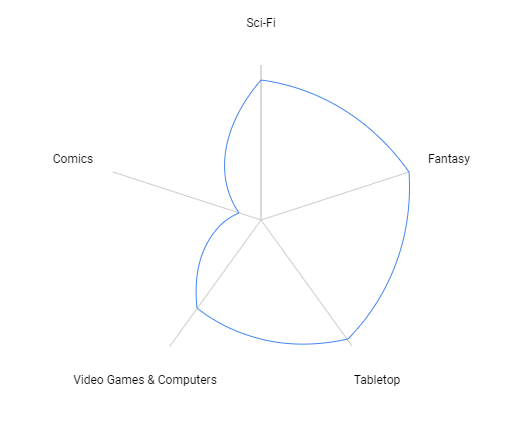 So their geek-zone was much bigger than mine! And that filled my 15-year-old self with irrational worries: Am I geek enough to be considered so? I don’t like comic books, I don’t like sci-fi, but I’m big on video games and I love fantasy so … I must be ok? Do they see me as a fake-geek? Should I force myself to LIKE Star Wars?

Tests that try to figure out how geeky you are are a dime a dozen these days (and usually in 10 questions or less!), but back then there was this like … 130-question test that would give you a geek score. I can’t recall the exact numbers, but among my friends, the average was probably 65% (except that one guy who got a solid 90%), then there I was with my 40%. Was I a poser among the outcasts? But I didn’t fit in with the bulk of kids my age so … what did that make me?

Well, cool! I think we all share those sentiments at one point or another: it’s all part of trying to figure out where you belong. But while there were times my friends poked fun at me, there really isn’t one single true answer.

It’s a hard lesson to learn, because even I found myself thinking stupid things like “Well how can you say you like fantasy if you haven’t read Lord of the Rings?” But that’s really silly. There are other types of fantasy, and just because you like a genre doesn’t mean that you have to like everything about it.

At least, that’s my understanding.

There will always be people to make you feel like you’re not enough: you won’t know Star Wars enough for some, you won’t have read the right books for others, you’ll have opinions about the sexism in comic books that will clash with other people’s point of view … there’s just nothing you can do about it.

I have suffered, so you should suffer too

Now I’m not saying everyone feels or thinks this way. But some liked things that are now mainstream before they weren’t (not trying to be hipster or anything) and were branded as “geeks” as an insult. For them, there was a certain level of suffering involved: sometimes it was just teasing, other times it was outright bullying. And for a handful of them, the fact that the younger generations of geeks don’t have that baggage means that they’re not true geek: after all, are you really an outcast because you’re obsessed with playing video games? Probably not, actually. 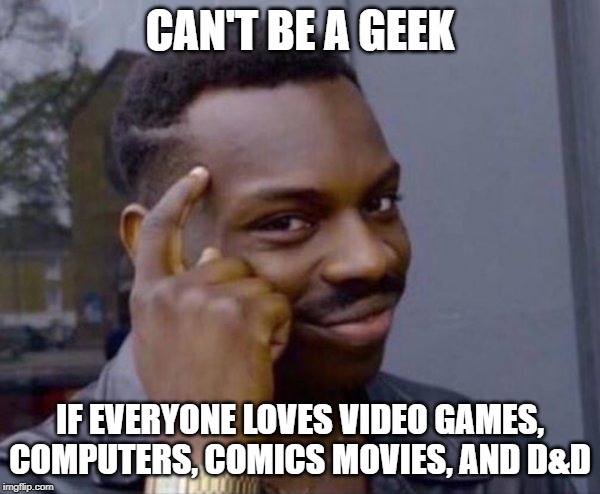 Does it mean that being a geek lost its meaning? Once, being a geek was not something you were proud off: others decided you were a geek because you were weird and obsessed over trivial, unpopular things.

The pop culture landscape has changed tremendously over the past 15 years. Things that were once shunned are now pretty mainstream. Between the very-high-budget Marvel movies, the various D&D podcasts, the use of technology in everyday life, one can wonder what makes a geek a geek. Today, it feels like the term is worn more like a “badge of honour” than given as a form of insult.

Yet, some will make others feel like they haven’t suffered enough, or are just plainly not enough to belong to the group. Isn’t that just silly though? Isn’t that exactly what others did to us for so long? Perhaps I’m just being overly optimistic, it’s just so much healthier to focus on what makes us alike.

Another thing of note is that the number of fandoms has exploded over the past few years. While fandoms are more mainstream, they are more numerous than ever, and split in even more subfantoms. Sure, fandoms were never as clear-cut as I made them out to be: sci-fi, fantasy, tabletop, computers/video games, and comics. But today, there’s so much more “specialization,” if you will. Let’s say I pick some interests commonly labeled as geeky and try to the same exercice as before, I find myself with a completely different graph: 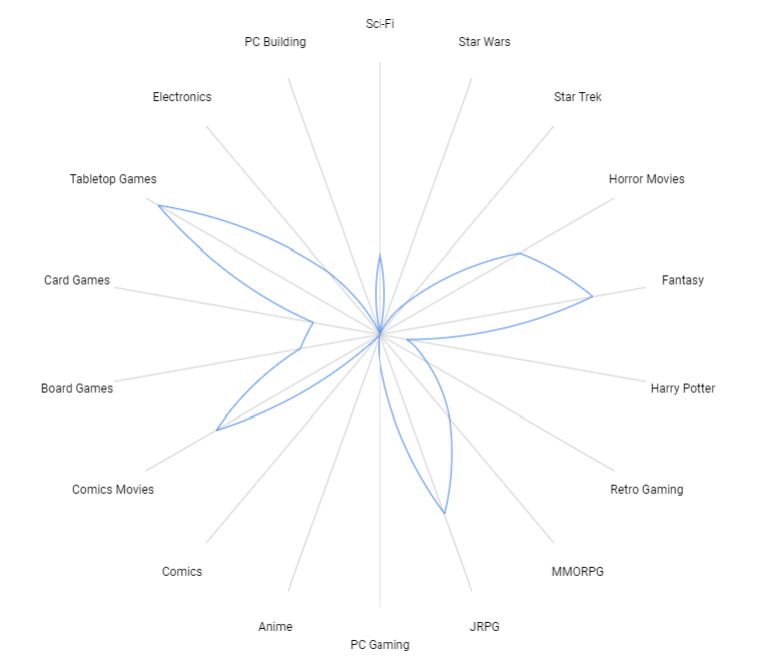 Like what the hell is even this? AM I LESS GEEKY THAN BEFORE? Errh... actually... about that... 🙄


You can’t please everyone

It’s as simple as that, and a hard lesson to learn. Someone would have told me this as an insecure 15-year-old, I would have probably just scoffed and kept worrying. Even today, I worry: when I GM in a setting or a system I’m less familiar with than other players, my insecurities come back to haunt me: will they think me a fraud of a GM?

While I know I shouldn’t care, it’s real hard not to. But over the years I realized something pretty important:

The trick, the real trick, is to not surround yourself with assholes.
Labels: About me Misc