Finding a steady group of players: Study of a CR 20 GMing challenge

We’ve all be there: Saturday evening, watching some crappy TV series on Netflix, questioning our life choices while munching on some chips. What? That’s just me? Regardless, there probably was a time that you told yourself: “Fuuuuuck this weekend would be sooooo much better with some D&D…!”

Or something along those lines.

But then you grab your phone and start sifting through your contact list, maybe even poke a few people, and then you realize “Well, this ain’t gonna be easy.”

Pretty sure this happens to hundreds upon hundreds of players, but believe you me, it also happens to game masters, whether they’re shiny and new, or have been around so long they’re covered in dust.

You’d think it’s easy to shout “MY TABLE IS OPEN!” and a flock of players will join, but, actually, it isn’t. 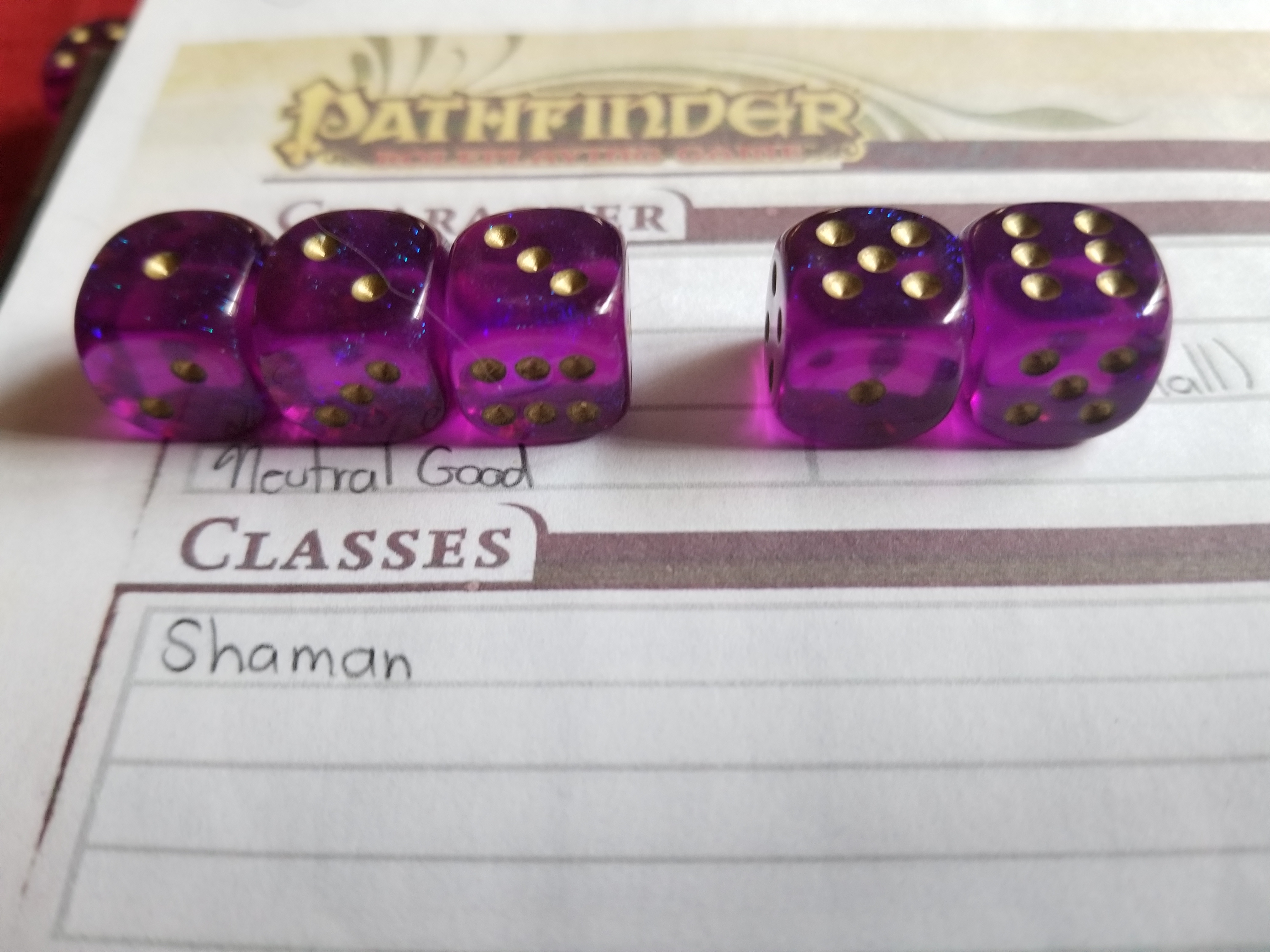 Some may know this but I’m a pretty damn anxious AND self-conscious person. Terrible combo for a GM, if any. Add to that not being a “people person” and you’ve got a recipe for disaster. Sure, I could just not GM and let someone else take those bullets, but what would be the fun in that?!

This was SOOOO much easier in high school. We could spot potential D&D players from a mile away. I’m not saying that to be mean, but once upon a time (high school was NOT yesterday for me), you were looking for oddballs and geeks. And we were quite spottable. But as an adult, well, that’s not entirely true.

Most people would agree that looking for players at your local gaming or hobby store is probably a great place to start. I don’t know how they are where you live, but out here, they usually have some form of message board, or dedicated gaming nights that you can attend and use to chat to like-minded people. Probably the straightest, simplest way to find players: after all, they’re already a bunch of geeks and you know for sure.

Don’t know if you have have such a place near you? Time to hit Google Maps with a good old “gaming store near me” and filter out actual video games. Truth is though, local gaming stores may not be aplenty in your area.

You can also check out gaming conventions and local gaming groups (there are some in colleges around here) in your area.

If I’m being real though, I can’t say that’s something I’d do. I’m extremely introverted and being a girl, walking into gaming stores, I’ve been looked as if I’m some lovecraftian horror once too many. Other people who dislike crowds and the unknown may want to give up GMing. Perhaps they should just look elsewhere. But… where?

Over the past, playing Dungeons & Dragons made you an outcast (and playing other, more obscure games sometimes made you an outcast among outcasts.) Seems like things are changing though. Perhaps with the rise of channels like Geek and Sundry and their Critical Role series, or podcasts like Dragon Talk, there’s less of a stigma around playing tabletop games.

So I ask, why not make use of that breathing space?

Perhaps you have friends, family members, coworkers, whatevers, who are dicecurious, if you get my drift. Possibly the best way you can go about starting a group is just asking people you know. Maybe they want to try it out, maybe they have brothers, high school buddies, or whatever who already play or want to try as well.

Building a group from people who know one another is, to my sense, always the best route. It builds stronger, more personal relationships, and the expectations are not the same as when you’re “shopping” for players, or a GM, at a local gaming store.

… online. Cause that’s what Internet is for?

There are SO MANY tools for finding tables online (whether you’re looking for a real-life or online game, but let’s focus on meeting up at a table for now!) So, so many tools. Going online will give you a chance to exchange with like-minded people, and maybe even find players from the comfort of your own house. It’s also less involved and stressful than connecting at a gaming store, and it’s easier to set boundaries and also expectations for a game before getting too invested.

I’m not like a huuuuuge Facebook advocate, I really am not, but this has been somewhat successful for me: Look for any form of tabletop/geek groups in your area. Be mindful of the distance you’re willing to cover, mostly if you live in a more remote area. These groups shouldn’t be seen like a dating app for gamers, though. 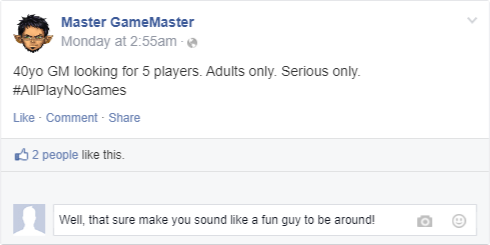 But let’s be real. Starting with a broader approach like “Hey I’m thinking of delving in that new system. Anyone’s tried it before?” may increase your chance of having a meaningful conversation with someone, and from conversations like that can stem friendship (or something akin). It’s much less transactional to then invite someone to a game afterwards.

Other tools include following the Looking For Group subreddit (enter at your own risks), subreddits for specific games (like Pathfinder or Dungeons & Dragons), joining tabletop RPG focused Discord servers (check out Disboard to search servers by tags!), creating and joining events on Meetup.com, and so so much more.

That kind of tools is super useful when living in a thriving community, but otherwise, you might want to consider online play, using tools like Roll20 or Fantasy Grounds, which is a whole other beast in itself

Players are good, the right players are always better 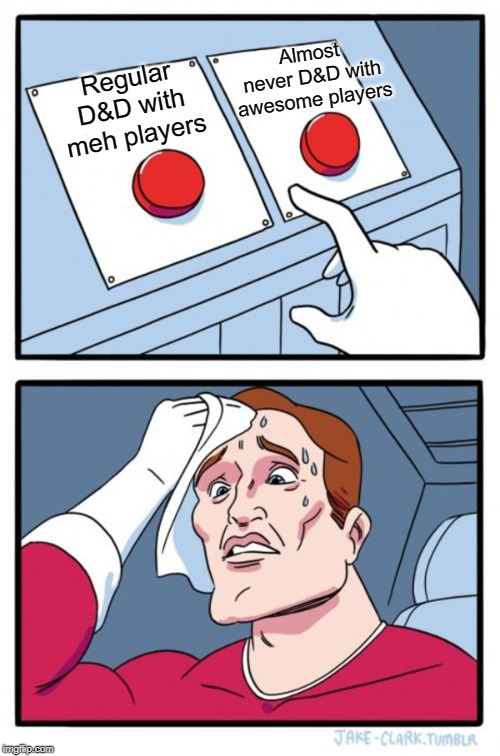 Even if you HAVE found players, they might not be the right fit for your table or play style. If you’re just starting out, that’s fine: gotta learn what it is that you want before you can express it to others. But if you’re an experienced game master, before you start a game, make sure to manage and communicate your expectations to your players. Here are some points you might want to discuss with your players:

One good way to actually get a feel for the group, how your players will work together or not, is to play a short game (one or two games max) before committing to a long campaign.

That’s all I got for now. Now I need a drink. While I pour myself a whisky over here, I'm gonna wish you the best of luck on finding players. And don’t forget, sometimes, you just gotta close your eyes and jump (but NOT when standing on a ledge)!